Energy Titans Get Schooled in Sharing as Billions Seen Blown

On the leafy southern shore of Australia’s Curtis Island, a jetty shoots out over a stretch of water to fill tankers the length of city blocks with liquefied natural gas. Another jetty juts out about 2 kilometers south. A further 800 meters down the coast sits a third.

For one industry veteran, the crowded shoreline represents a $10-billion missed opportunity. It’s the amount that could have been saved had the energy rivals that built separate LNG plants on the island collaborated on a single facility, according to Martin Wilkes, a consultant with 20 years industry experience. They could have produced the same amount of fuel but eliminated extra jetties, storage tanks and other costly infrastructure, he estimates. 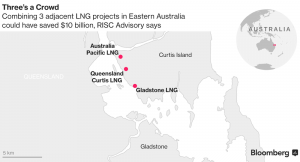 The extra cost may not have made energy giants flinch in the days of $100 oil, but after the biggest collapse in prices in a generation it can make the difference between a project living and dying. Companies like Exxon Mobil Corp. are now looking at proposed projects from Mozambique to Papua New Guinea and asking how project developers that would have been competitors can instead be partners.

“We talked to the Curtis Island projects in 2009 about combining and collaborating,” but they ended up building all three, said Wilkes, a Perth-based principal adviser at RISC Advisory. “There are significant savings to be made through collaboration, but people have to approach it in a way that’s different than the past.”

Mozambique’s government is pushing two competing LNG projects to work together to improve economics, according to the partner in one of the ventures. Exxon is spearheading the combination of rival projects in Papua New Guinea. In western Australia, Woodside Petroleum Ltd. is pitching for competitors to use its existing liquefaction plant in lieu of building their own. Unsanctioned projects in western Canada may also collaborate, according to IHS Markit Ltd.

Energy companies have long partnered together on individual projects to share costs and risk. The shift now toward combining already-planned projects is part of a larger cost-cutting effort across an LNG industry that’s trying to snap more than two years without a major new project sanctioned. About $1 trillion in global energy spending was curtailed because of the energy crash, Saudi Arabian Energy Minister Khalid Al-Falih said in Kuala Lumpur Monday.

Producers are under pressure to keep costs down as a spate of new LNG plants approved earlier this decade come online over the next few years, threatening to overwhelm demand and keep a cap on prices. Annual global production capacity will grow to 407 million tons by 2020, compared with projected demand of about 274 million tons, according to Bloomberg New Energy Finance.

“We’re seeing a lot of people try to push down costs, and where they can collaborate on projects they probably will,” said Kittithat Promthaveepong, a gas analyst with industry consultant FGE in Singapore. “This will probably be the general way forward.”

If producers can’t find a way of affording new projects, that surplus could eventually flip to a deficit as cheap LNG spurs more consumption. Demand will outpace supply by 2026 without new developments being funded, according to BNEF.

In Mozambique the government is pushing two rival LNG projects — one headed by Anadarko Petroleum Corp. and the other by Eni Spa and Exxon Mobil Corp. — to agree to a framework that would allow them to develop independently but eventually share onshore liquefaction infrastructure, according to PTT Exploration and Production Pcl, a minority partner in the Anadarko venture.

“There has been lots of discussion between the two blocks and the government,” the company’s chief executive officer, Somporn Vongvuthipornchai, said in an interview in Bangkok in March. “We support that so that the thing would make economic sense.”

Eni and Anadarko didn’t respond to emailed requests for comment. Exxon declined to comment.
Across the Indian Ocean in Papua New Guinea, Exxon bought InterOil Corp. so it could take a stake in Total SA’s proposed Papua LNG project. The Irving, Texas-based company already operates one LNG plant in the South Pacific nation, and it’s negotiating with partners Total SA and Oil Search Ltd. to combine the projects. Doing so could save $2 billion to $3 billion in construction costs, according to Oil Search.

LNG operators and host governments continue to look for creative ways to reduce cost and be more competitive, IHS analyst Bob Fryklund said in an email. Gas projects in Canada, Mozambique and Senegal are all candidates for more collaborative models, he said.

In western Australia, Chevron Corp. this summer will complete its Wheatstone LNG project, which is designed to let other producers use its equipment to liquefy their gas. Meanwhile, Woodside Petroleum Ltd. is courting energy majors like Exxon and Royal Dutch Shell Plc to abandon plans for new liquefaction facilities and instead feed gas into its existing Pluto plant.
Malaysia’s Petroliam Nasional Bhd, which is a partner in the Gladstone LNG project on Curtis Island, said there were “missed opportunities” for the three projects to collaborate on common facilities such as jetties, pipelines and roads. Working together can be contentious and authorities probably need to help facilitate it, said Adnan Zainal Abidin, Petronas’s acting vice president for LNG assets, development and production.

“We should learn from the lessons from Australia,” Abidin said Tuesday at the Asia Oil and Gas Conference in Kuala Lumpur. “Projects in the same geographic location should consider the possibility of sharing some of the same facilities.”