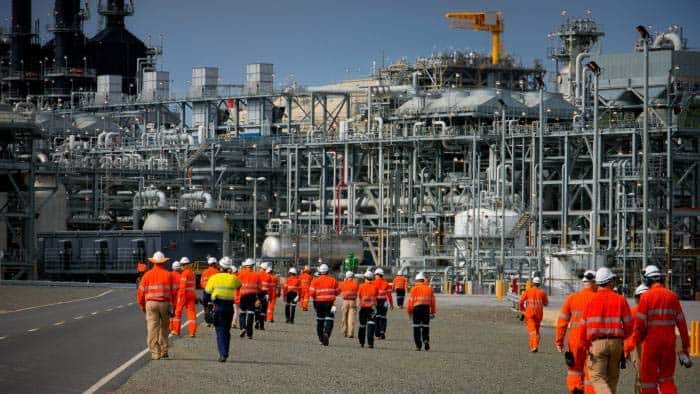 Chevron has completed construction of two massive liquefied natural gas plants in Australia at an eye-watering cost of $88bn — and is wasting no time in trying to change how such megaprojects are developed in the country. The US oil major is operator of the Gorgon and Wheatstone facilities in Western Australia, which together will produce almost 25m tonnes of LNG per year — enough to meet annual gas demand in the Netherlands. The new plants are part of a $200bn investment splurge that should see Australia move past Qatar to be the world’s largest LNG exporter by next year.

On Friday Chevron began producing gas from the second LNG train on its Wheatstone project. But the two Chevron-led megaprojects endured construction delays and billions of dollars in cost blowouts due to technical difficulties and rising labour costs. The US oil company, which has discovered 50tn cubic feet of gas reserves in the nearby Carnarvon basin, is seeking more cost-efficient ways to develop these resources.

“Historically the LNG business has been a point-to-point approach to developing resources,” said Steve Green, president of Asia Pacific Exploration and Production at Chevron, with individual resource holders building their own facilities and pipelines, and drilling the wells if need be. “There is a more cost-effective and efficient way to see those resources developed.”

Mr Green said Chevron was talking with government and industry partners about building a sub-sea pipeline across the Carnarvon  Basin, a resources-rich area off the north-west coast of Western Australia. This shared infrastructure would have multiple interconnection points that allow different groups developing gasfields in the basin to tap into them, and reduce their costs by removing the need to build their own pipelines, he said.

Chevron said the resource holders could join together to pay for the multibillion-dollar pipeline or engage a standalone infrastructure company to build the project. 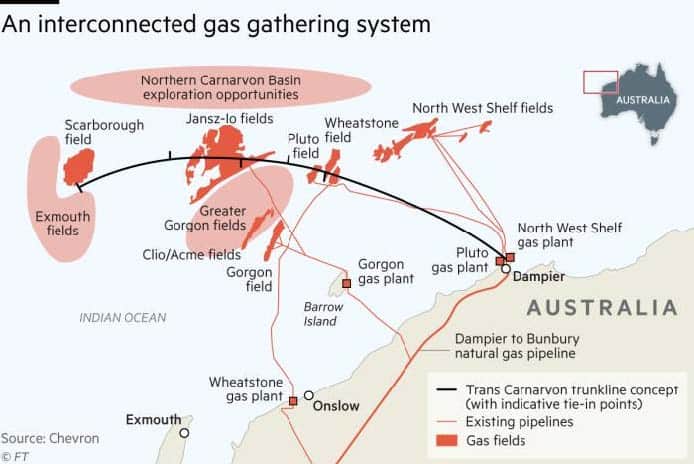 According to Mr Green, reducing costs would help Australian LNG to better compete with other global producers in the Middle East, Africa and the US, which is beginning to ramp up its Asia-Pacific LNG exports. Analysts agree the idea of sharing pipeline infrastructure makes sense, citing the example of the $60bn Curtis Island projects in the state of Queensland on Australia’s east coast, where Royal Dutch Shell, Santos and Origin Energy operate three separate coal seam gas LNG plants and pipelines. In the rush to develop the resources, these projects experienced construction cost blowouts and opportunities to share infrastructure were ignored.

Martin Wilkes, managing director of RISC, an independent oil and gas consultancy, said the LNG industry is having something of a “collaboration nirvana” after realising that by co-operating more during the decade-long resource boom, which ended in 2014 when oil prices slumped from more than $100 a barrel to below $30 in 2016, they could have saved up to $30bn. “Boards are now saying ‘we can’t afford to spend this amount again’, which means collaboration is again in vogue,” said Mr Wilkes.

However, he warned that the reversal in market conditions, with oil prices higher and LNG demand from China on the rise, could again embolden producers to go it alone. Woodside, which owns 13 per cent of Wheatstone, is the key player in talks with Chevron on the idea of a shared pipeline in the Carnarvon basin.

“Boards are now saying ‘we can’t afford to spend this amount again’, which means collaboration is again in vogue”

the Scarborough gasfield, 300km offshore, of which it owns 75 per cent. That infrastructure could be extended to reach Chevron’s nearby gas.

However, that risks complicating or delaying Woodside’s Scarborough development plans. “We think in the first instance it is best for us to build it [pipeline]. We can then integrate that into a project,” Peter Coleman, Woodside’s chief executive, told reporters recently.

Woodside has said it needs serious commitments to a shared pipeline from any interested parties by the third quarter, leaving little time to align the competing priorities of Woodside, Chevron and others.

Mr Green said he was confident Chevron could work something out with Woodside but his confidence was not shared by all industry observers, with many doubting Australia’s model of LNG development would change any time soon. “There is logic in having a common infrastructure, given the increasingly competitive LNG market and need to lower costs. Changing the North West Shelf into a tolling plant is a step in that direction,” said Neil Beveridge, an analyst at Bernstein. “However, the ‘first mover’ mindset of ‘winner takes all’ remains the norm among operators, making a Trans Carnarvon pipeline little more than a pipe dream.”