EMPEROR Energy has engaged Perth’s RISC Advisory as independent resource certifier for its VIC/P47 in the offshore Gippsland Basin. 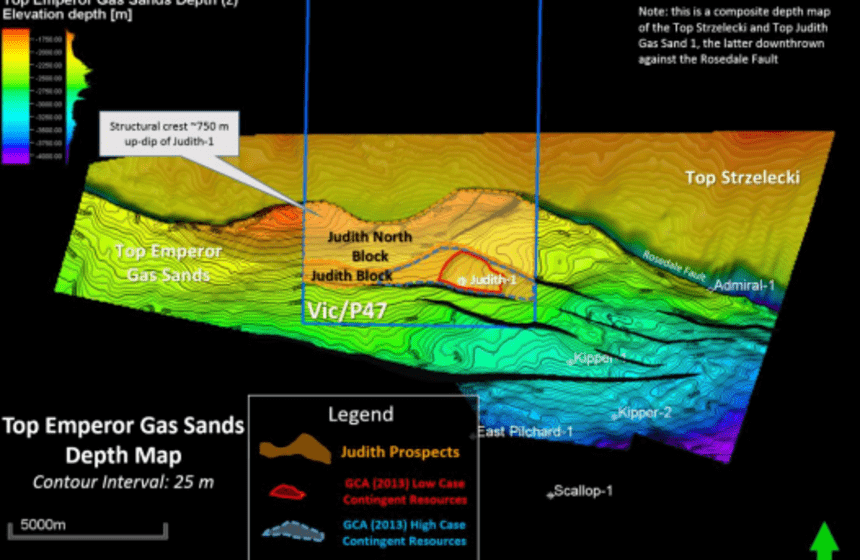 The offshore basin supplies a good portion of Victoria’s gas, and as a result a fair whack of New South Wales’ also, but has been depleting in recent years as the Bass Strait has matured.

Longford’s May production was down 22% over the same period last year.

The resource statement is scheduled for the end of August following completion of static and dynamic modelling of the Judith gas reservoir sands by 3D-Geo in Melbourne in early August.

Emperor says that the reservoir engineering studies have been progressing through the past month and refinement of the seismic interpretation and depth mapping of four gas pay reservoirs across the structure defined at Judith-1 has been completed.

Additional work has included an interpretation of productive gas sands at SGH Energy’s Longtom gas field, located 22km west of Judith-1, and Emperor said that the Lower Admiral Formation reservoirs have been mapped as extending from Longtom eastwards across the Judith structure, but below the total depth of Judith-1.

Seismic amplitudes indicate the presence of gas saturation in these reservoirs but gas-in-place estimates have not yet been estimated for this section but will be assessed by this new work.

3D-Geo will complete the reservoir model this month and then the reservoir dynamic model next month and will then hand data to RISC for independent auditing and assessment of contingent and prospective resources.

Emperor was trading at 0.2cps this morning.