THE race for the east coast LNG import terminal has shifted again with consortium Australian Industrial Energy confirming it has sought to alter its development consent thanks to surging customer demand. 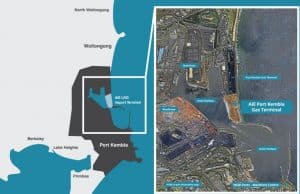 “AIE has advised the NSW government that in the face of substantially higher customer demand for gas supply and throughput capacity at its Port Kembla gas terminal, it will be seeking a modification to its existing Development Consent,” a statement emailed from an AIE to Energy News said today. AIE, which includes Japan’s Jera and Marubeni and the Andrew Forrest-backed Squadron Energy, initially planned to import 100 petajoules of gas a year via Port Kembla and was thought by many to be ahead in the terminal stakes, but with a capacity expansion and the possibility of a 750 megawatt gas-fired power plant that may change. There is now also the possibility some customers may want to buy ragas capacity at the terminal for their own spot cargoes.

Last week South Korea’s Epik won critical infrastructure approval from NSW Liberals for its own terminal in Newcastle, which AIE won in November before receiving the project development approval in April this year which it now seeks to modify. “The expanded capacity is required to meet much higher winter peak gas demand than current plans and planning approval anticipated.  While the planning modification process will take some time, AIE remains confident that it can develop the project in advance of customer needs,” its statement said.

Speaking with Energy News last week RISC Advisory managing director Martin Wilkes suggested two east coast projects would not be too much of an overbuild “depending on the commercial arrangements”, based on earlier stated 500 terrajoule capacity for each “all of which is fairly reasonable and understandable”. Currently the state imports 95% of its gas. “In the context of the overall east coast domestic demand of 550-600 petajoules per year, that implies that these two together will be able to supply around 35% of the total market – that seems a bit high, so either the market has to grow, or they have to take market share from incumbents,” he said.

One way to expand the market would be via more gas-fired generation, he noted, which both NSW contenders are contemplating. In Victoria AGL Energy is still languishing thanks to an environmental review demanded by the state Labor government and earlier this year added a year to its timeline, despite analysts earlier suggesting it would be first across the finish line.