SUN Resources has announced its Bowspirit joint venture with Pinnacle Exploration in Louisiana has progressed with RISC backing the Perth-based oiler’s field assessment with its own formal 2C contingent resources and most likely prospective resources estimate. 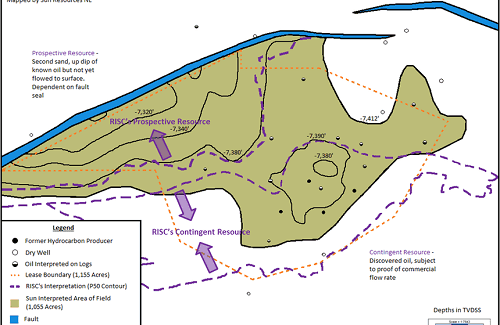 However despite the news the company dropped a huge 28% this morning, trading at .05cps.

RISC’s modelling assumes 2000 barrels of oil per day per well with Sun planning to cap output at 1000bopd to extend life and produce 5000bopd in total from five wells, with a breakeven price of US$25/bbl.

An appraisal well will be drilled in the fourth quarter of this year at an estimated cost of US$3.25 million, with the JV searching for a new farm-in partner to take up a third of the project and pay most of the initial well costs.

“Whilst the farm-out market is pretty weak at the moment, the low cost, relatively low risk, high production margin, and nature of the project should give us a good chance of bringing in a partner,” Sun CEO Alex Parks told Energy News this morning.

The company plans to remain operator and Parks says the well costs are “affordable by industry standards”.

“I expect the farminee will be readily findable from our network,” he said.

Sixteen wells have been drilled into the field in the past, and this latest estimate is based on extensive 3D seismic acquired by the JV and interpreted by both Sun and RISC.

Parks said that 3D seismic had shown potential resource volumes to be large than first thought.

Sun was trading at .05cps this morning after a precipitous drop of over 28%.